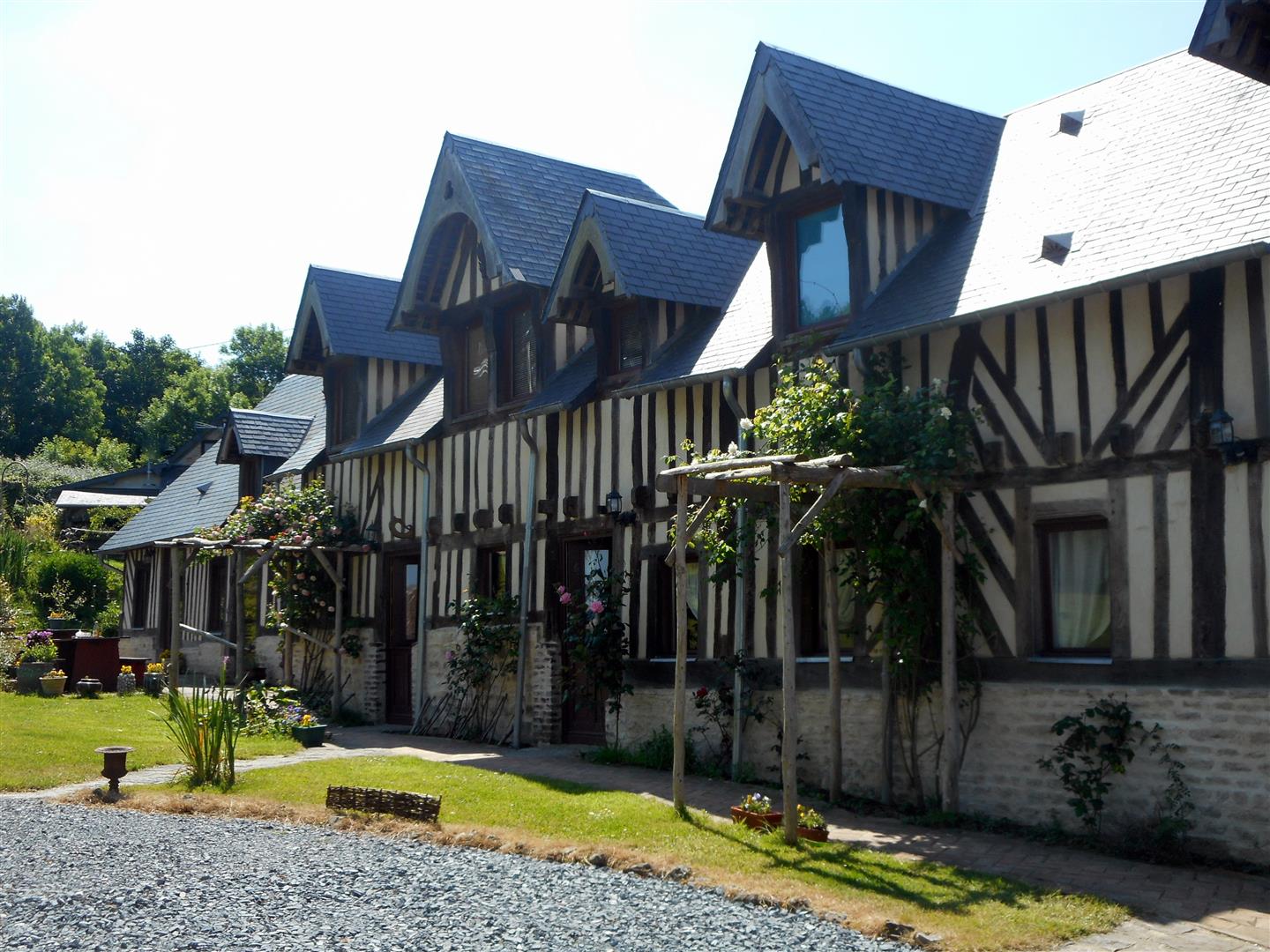 The main building was built in 1550, probably by Henri de Pontfol or Jacques, his son. It has, throughout its life, left its function of resort to become a farm.
The mansion was twice as big at the time. It partially burned in the eighteenth century and was cut by half! We do not despair to recreate this part and restore its original dimension!

The farmhouse, in which we have established our guest rooms, also dates from the sixteenth century with an extension created in the eighteenth century.
To note, the recycling of the beams saved during the fire of the Manor and which thus served for the construction of the stables.

In the oldest part, you will have breakfast in the Hall of Sighs. The cathedral ceiling highlights the old beams and the frame.

In the part of the Stables created in the eighteenth century, we installed our 5 guest rooms, each with their own amenities and private access. Three of them are on the ground floor and the last two are upstairs. They are all decorated according to a different theme, coming from Norman history. This financial contribution will allow us to continue the renovation of the small Manoir du XVIe, in a traditional way. All the income generated by the cottages is for the restoration of buildings, so thank you for your visit, thank you for your participation!

One of the interests of this Farm Manor, is that it has passed from generation to generation without undergoing real transformations, nor the passing fashions usually brought by each new owner. It has preserved, throughout its history, a certain virginity, its former entity.

Although very aware of the amount of work that awaited us, we decided to settle in this charming estate in 2001. Our mission, as we defined it at the time, was to give back to this Manor, his stamp of yesteryear and above all help him to cross the next centuries, as he had already done so well !!

Our first goal was to save the buildings which, for some, very damaged, threatened to collapse in the very short term!
After carrying out emergency work, working on the redevelopment of access and places, we chose to completely restore the largest building, the farmhouse and destined to the tourist reception to finance the continuity of the work.

We considered this rehabilitation, in the respect of architecture, materials, techniques and medieval traditions of the Pays d’Auge. The timber, oak or pear, key parts of local architecture directly inherited from the Middle Ages did not allow us to do otherwise.
The half-timbering is mud, excellent natural insulation. We also used a lot of recovery materials. The interior is brick, mud, stones and oak floors.
Our priority has always been to combine comfort and authenticity.

We did all the work ourselves and even made the mud with the land of our fields, barley straw and our hay!

We love our small estate. We naturally wanted to share it and to receive you.
It is with pride and generosity that we are waiting for you at home to help you have a comfortable, warm and exotic stay!

For history buffs, here are some excerpts from archives that we found on our domain, thanks to Mr. Chauvelot, descendant of the Lords of Pontfol:

The 13.09.1773 (National Archives – Minutier Central of Notaries – Study Arnould, cote XIV-438) Louis Fleuriau ( ? – 1787) buy from Joseph Cadet and Angélique Fortier the land and lordship of Pontfol in Normandy, baillage Pont l’Evesque, which he and his descendants will now bear the name. Louis Fleuriau is a licensed lawyer, a lawyer in the Parliament of Paris, a former secretary to the Government of Canada. He is the son of an officer in the Aunis regiment and will be the lawyer of Joseph Cadet when the royal government will throw him in prison for malpractices.

The eldest daughter of Louis Fleuriau de Pontfol, Sophie Nathalie, will marry 22.07.1834 in Paris Thomas Chauvelot (1800-1858). The latter will carry for some time the name of Pontfol, because his father-in-law, Antoine Philippe Louis Fleuriau de Pontfol had asked in his will that the husband of his eldest daughter add to his name that of Pontfol. He had only two daughters of his marriage.

Thomas Chauvelot and his wife will sell what belonged to them from the land of Pontfol (including “Les Bas Vents”) on 15.09.1857 before master Thiroux (or Thiron) notary in Cambremer inMr and Mrs Amant et Mr Lemagnant.

The land and the lordship of Pontfol: the ¼ of a knight’s fief with all its useful and honorific rights are attached. In particular the right of patronage. The town of Pontfol has existed in Calvados since the Revolution until 28.03.1858. On that date, a decree brought it together with those of Authieux / Corbon to form a new commune, Victot Pontfol. (Sources: Departmental Archives of Calvados 09.11.1967).

Cadet Joseph-Michel (1719-1781)
Apprentice and merchant butcher, bourgeois merchant ammunition, general food.
Michel Caddé became Cadet in the following son of Michel and Elisabeth Lefebvre, was born in 1668 in Niort, in the Deux Sèvres and came to Canada on January 25, 1674. He married Marie Constantin in Quebec City. gave six children. The third, François-Joseph, born in 1697, married in February 1719, Marie-Joseph Daveine, who gave birth to Joseph-Michel on December 24 following.
His father, who was a butcher, died on December 11, 1720. His widow remarried in 1724 to Pierre Bernard of Charlesbourg, who adopted the orphan and had him educated. The teenager entered as an apprentice butcher with his uncle Augustin, then became a butcher and then a wholesale trader. Credit and success made him a respectable bourgeois, at the age of 27, in 1746. He was not long in winning the good graces of intendant Hocquart and those of M. Bigot. In 1748 he was chosen as the general ammunitionman of the king’s food: his commercial contracts went to enrich him because of the circumstances and hostilities of the seven-year war. It is recognized today that Mr. Cadet deployed an intense activity to provide for the needs of the troops, especially during the two years of famine. The memorandum of financial instructions, which he filed in quadruple on August 10, 1758, in the study of Mr. Panet testifies to its power of organization and the merchant fleet sailing annually between Bordeaux and Quebec, and transportation of food to the most distant posts of the colony: he served as an instrument to the dishonest Bigot and then became his victim. M. de Vaudreuil bestowed praise on him in his correspondence, and solicited the granting of letters of nobility as remuneration.
After the capitulation of Montreal in 1760, Mr. Cadet embarked for France with his family. He was interned in the Bastille with 54 accused of dilapidations. From the beginning of the trial the ammunition officer seconded the investigators of the court about public finances. M. Bigot, in his defense, overwhelmed him with all his contempt. On February 25, 1762, the court granted relief to Mrs. Cadet and her children. On December 10, 1763, the sentence sentenced the munitioner to nine years of banishment from Paris, 500 pounds of almond, and 6,000,000 of restitution.
On the 11th of March, 1764, the king thought it expedient to pardon him for banishment. He was granted a passport to settle his affairs in Canada (April 15, 1764-January 1765); on the llth of March, an order was given to give him 200,000 livres in exchange bills which belonged to him: he was returned his sequestered papers (February 24, 1766). Prosecuted and incarcerated a second time for refusal to report, he was released by royal order three months later (25 March). According to Mr. Soulavie, Mr. Cadet claimed from the government between 10 12 millions and that, to be exonerated, he was rehabilitated; and a judgment of the council, rendered in 1767, granted him the sum of 5,460,000 livres.
From then on, M. Cadet made the grand seigneur, buying: the land of Gontranville in Normandy, which he paid 376,000 livres, that of Neung-sur-Beuvron in the Blaisois; the barony of Avigny, for 160,000 livres; the lordships of Ponçay, Mondon, Marigny, etc. ; and the castle of La Barbelinière, near Châtellerault (Vienne): all estimated at 800,000 livres. He spent a fortune on appropriation and restoration. Nevertheless, he did not stop asking the court the other millions, the remainder of the 10 or 11 that came back to him. It was unsuccessful. Then he had to sell his estates in 1774. In 1778 he had nothing left of his fortune. When he died in Paris on January 31, 1781, he was found insolvent. Ten years later, his last properties are auctioned: in vain his heirs pursue his claim in endless lawsuits.

1. On September 11, 1742, Cadet married Angèle Fortier, Quebec, who was the mother of eight children, four of whom died in infancy. Two of his daughters united with honest families in Chatellerault. The only surviving son, heir to the castle of La Barbelinière, married a young lady Lebeuf: he does not seem to have left posterity.

The action, of course, takes place at the Manor, Cambremer and its surroundings!